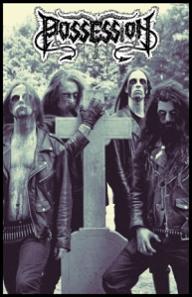 Iron Bonehead Productions allways know a good death metal band when they hear one and this time is no exception. From Belgium hails an uknown entity named Possession and their demo (now officially released under IBP) called "His Best Deceit". A well played tribute to the old days of death metal. This release contains three originals and a cover of Sepultura´s Necromancer (so you´ll know what to excpect from this fearsome foursome).

The production is done the old way but sounds clear and powerfull with all the instruments getting their time in the spotlight. The vocal is singed with some reverb that makes the sentences appear longer and it really fits the music well.

Possession delivers on all accounts with their take on vintage evil sounding death metal. A special treat is that "His Best Deceit" is relesed on numbered 666 tapes only.

That´s underground enough for you?