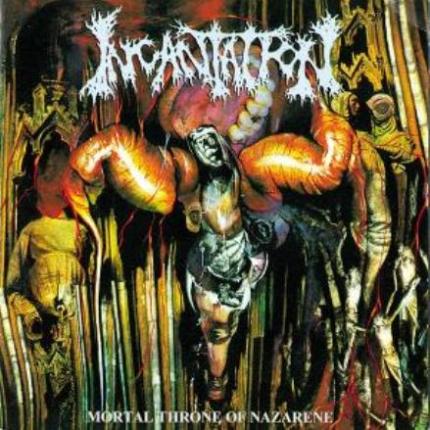 Incantations cult classic «Mortal Throne of Nazarene» is seeing the light again as a re-release.

McEntee & Company’s second full-length release originally from 1994 was a superb follow up to their dark and murky debut "Onward to Golgotha" from 1992.
Their brand of death metal was menacing at the time and there’s to many clones/impersonators to mention today but one that deservers it is Father Befould.
Anyhow, the production and overall sound of "Mortal Throne of Nazarene" is intentionally dark and muddy with Craig Pillard’s vocal contribution making it a true evil piece of extreme metal.

Much praise have been written about this fabulous album during its almost 20 years of existence so to summarize this in three words, GET THIS ALBUM!
If crushing, timeless and at the time innovative death metal is your cup of tea of course.

RIVERS OF NIHIL – The Conscious Seeds of Light