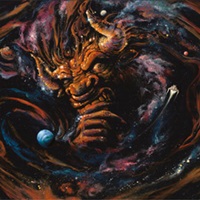 The 9th album from New Jersey psychedelic, space hard rock band Monster Magnet is "Last Patrol" – a 9 song, 52 minute plus excursion into the time warp ways of vocalist Dave Wyndorf, guitarists Garrett Sweeny and Phil Caivano, bassist Chris Kosnick , and drummer Bob Pantella. Expect a variance in terms of arrangements: the title cut jams instrumentally with this fuzz box, wah wah guitar influence at 9:41, while other songs focus on killer stoner rock melodies and low, doomy overtones such as "Hallelujah" or "I Live Behind the Clouds".

The band also put a different spin on the Donovan song "Three King Fishers"- keeping the Egyptian thematic elements but obviously turning up the distortion and heaviness to make it somehow their own 37 years after the fact. I enjoy the fact that Dave doesn’t mind putting in strange effects on his voice for "Mindless Ones", or the relatively upbeat nature that promotes musical flexibility on the eight minute "End of Time", something you don’t often see in a band that has been recording albums since 1991. Ending on a Pink Floyd-ish note with the quieter vocals and acoustic strumming of "Stay Tuned", Monster Magnet at this point in their career doesn’t have anything left to prove – and we the listeners should be thankful as Dave and the boys write and perform from their hearts, minds, and souls, and not with corporate pressure peering over their every move.

Will they ever reach the heights of "Powertrip" again? Probably not- yet much like Clutch, I believe the band continually strive to take little chances that their audience will stay along for the lifetime ride. Spacey, psychedelic, heavy stoner rock- "Last Magnet" ignites the flame and you should be happy to handle the sonic sparks.