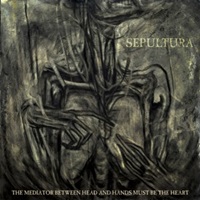 Post-Max led Sepultura has been a minefield to explore as far as sound changes and fan acceptance. No longer purely a thrash act, the quartet now led by guitarist Andreas Kisser, bassist Paulo Jr., vocalist Derrick Green and latest drummer Eloy Casagrande appears to be hitting a cross section of the metal and hardcore styles in terms of rhythm choices, riff / tempo changes, and overall aggressive vocal outlooks. 1998’s "Against" (the first album with Derrick) was a mild disappointment, and from there I’ve had more of a casual outlook towards the band’s recent studio output- with 2011’s "Kairos" another less than awe-inspiring effort trying to re-capture some of their previous thrash roots.

So we plunge headlong into "The Mediator Between Head and Hands Must Be the Heart" – a long winded word spew of an album title if I’ve ever heard one. Once again confusion reigns supreme to my ears as to exactly what direction Sepultura want to go in. Just when I think they lock into a great riff/ rhythm sequence such as the ending moments of "The Vatican", the new song "Impending Doom" churns along in this tribal doom groove-core manner with Derrick’s savage screams evoking a call and response effect that probably won’t sit well with the over 25 generation.

Looping sounds and tribal drumming open against another echoing Korn-like riff sequence for "The Bliss of Ignorants" – Paulo Jr. weaving his low stringed mastery against Eloy’s heavy handed percussion and as a result this is one of the more engaging and moving songs from the band during recent years. Other highlights include the dark, introspective "Grief" that could be as close to a Sepultura ballad as you will hear as Derrick employs a distant vocal perspective during the verses and the exotic swing that gives way to a jackhammer precise thrash riff churn within "Obsessed".

In the end, the Sepultura of my childhood is no more. Change can be hard to accept, but I believe the 2013 edition is moving to the beat of their own creative pulse, and as a result churning out a musical stew that many will enjoy and others will not. This is decent enough to delve into more for my tastes, but still not at the pinnacle of "Beneath the Remains" or even "Roots".