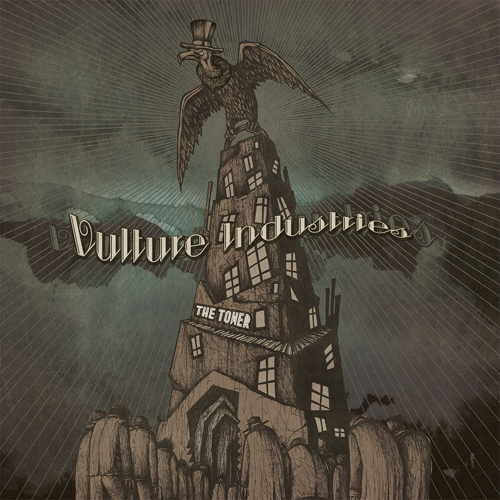 If you’re looking for another out of the ordinary musical experience originating from Norway, then the name Vulture Industries should be pretty high on top of that list. The band consists of current and former members of SULPHUR, BLACK HOLE GENERATOR, MALICE IN WONDERLAND and SYRACH and the avant-garde metal from their previous two full length albums has drawn comparisons with names like Arcturus, Devin Townsend, Faith No More, MR. Bungle and The Cult.

Prior to releasing their third studio album, ‘The Tower’, presented as a unique mixture of progressive, experimental, industrial, doom, extreme and even symphonic elements, the Bergen based Vulture Industries has announced their collaboration with the Happy Gorilla Dance Company. The result is a project known by the name of ‘Turning Golem’. The first live performance of this kind took place in Alba Iulia, in Romania, at the 5th edition of Dark Bombastic Evening ritual. Sometime during the crazy show I knew I HAD to hear the whole album, as soon as possible, as most of the music for the show was based on the band’s 2013 release, ‘The Tower’, plus few fragments composed especially for the live act. If you want to experience this feeling, you currently only have two chances: one appearance in Bergen and one in Czech Republic, 25th and 26th of October. I know for a fact that once you have the visuals of the chained rebelling golem, of the dancing half golem/half human lady, of Bjørnar Erevik Nilsen’s expressiveness and hypnotising eyes or of his insane smashing of the tambourine, of the whole band dancing in circle around the singer, of the shadow projections, of everything else, then the album’s music sums up into an incredible soundtrack that appeals to a lot of your senses, not just the auditive one. On the downside, this makes it rather difficult to chose whether to focus strictly on the music, or to think about song stories and meanings, so I’ll try to find room for both of them in the text below.

Before you read the review, you might also want to watch the youtube video for the intro song, ‘The Tower’, published by Season of Mist. There you can follow the lyrics, while you watch a surreal captivating clip made by the same artist who did the album art work (plus many other great works of art for musicians ands and festivals), Costin Chioreanu. The video is available here http://www.youtube.com/watch?v=acZ_pm7R22Q

"The tower is yours to climb" and it’s only fair you are given, from the very beginning, a short presentation of what this whole tower is all about. And once you think you have the massive dominating ugly building figured out, you’re given several new hints that invite you to visualise a tremendous image of the world we built under the dynasty of property and wealth. It actually looks way better once you start climbing towards the pretty looking peak. You no longer see the crooked reality that you have left behind and and that is made of walls built blood upon brick brick upon bone. The way to the top is paved with fake perfection. But luckily, in this case, it is a journey during which you’re accompanied by dark and powerful music. The way the song starts, with fast drumming, makes sure you’re awake enough to beging the trip to the Tower and you pay attention to the story so well told by the blend of singing/narrative parts, with an almost obsessive beautiful guitar repeating parts on the background. The song ends in an explosion of tambourine beats and screams that almost feel exhausting, and you’ve only passed the first song. It just makes you curious to see where the madness takes you next.

You actually may think you went a bit insane as you experience the constantly repeating drum/tambourine beats during the next song, Divine – Appaling, where you probably realise the hideous side of the things and beings who already climbed before you and who appeared so perfect from down below. But now, at the top of the stairs, you meet the Hound. The beast is introduced by the third song of the album, a song that represents, for my own ears, a masterpiece and a rollercoaster of emotions. The kind of song that, even if it has played few hundred times in your playlists, it still has something new you didn’t notice before. But the first thing I loved about it was simply the way it was full of powerful emotions, from one end to another. Emotions that move you (the guitars are such an elegant cry of despair) and frighten you when you hear whispers and the lazy rhythm and that almost break your heart in the middle of the song. Then, the slow part is ended with some frantic cries, that only stop when the guitar and voice rhythms are intensified and make you actually hear how the hound keeps calling hopelessly, as its world keeps falling.

Up next, there’s a mad-man whispering and telling us about the Blood on the Trail, whispers accompanied by the soundrack of madness performed on a hammond organ that completes the demonic playfulness of the song. There’s even a noticeable guitar solo that almost breaks the Vulture Industries kind of fantasy. But then you realise that this fantasy doesn’t have any rules to follow, so anything goes, and it goes quite well. And the macabre-show-like sound of the organ returns at the end of the song to pretty much prove what I just said.

The shortest track of the album, The Dead Don’t Mind, offers a bit of a softer blues-like rhythm, with a perfect Tom Waits touch in the whole sound. It is soft enough to enhance the effect of the whispers telling you that the dead don’t mind if he cuts them up into tiny little bits or sells them up for science. A slower paced tambourine keeping the rhythm and a guitar tuned in a ‘macabre’ scala are working, together with the voice and the text (which is, for once, easy to understand), to meticulously enhance the noir and surreal setting in your mind. Not for the faint hearted, this song. The gruesomeness is continued when you face the blind justice that forcefully sets ‘A knife between us’ and it leads us to betrayal and useless regrets.

The Pulse of Bliss, followed by Sleepwalkers, are two songs that feel like the most normal ones so far, when you define normality by the standards of this band. The first of the two has a special addition in the shape of a minute long repeating incantation. Further on, the marching drum beats of Lost Among Liars lead you to resignation when you face the impossibility of changing the overall fate of things and you no longer can escape the deceiving reality. There’s a long contemplating silence at the end of the song, which probably represents the end of the album as well. But there’s no way you should stop here and miss the bonus track, Blood Don’t Eliogabalus.

This bonus track is made of two parts, meaning the first 2:30 minutes of ‘Blood Don’t Flow Streamlined’ (from The Dystopia Journals album), and after that, about 5 minutes of Vulture Industries homage paid to Devil Doll and its mastermind, Mr. Doctor, a composer of some of the best ‘audio horror movies’. The music is an own arrangement of a small part of the 1990 release, Eliogabalus. It’s a part full of energy, an explosion of beautiful orchestration where you might even spot a shade of happiness (it keeps reminding me of the sound of a scary circus, besides the Turning Golem visuals when the golem finally unchains itself and enslaves Bjørnar in return). But it’s actually only a prelude to another horror play in which your are trapped, only to be released by a genius return to the original Vulture Industries song. I didn’t quite realise this switch at the first hearings, but once I ‘saw’ the twist in the song, I whistled in awe.

Overall, this album stands out in the way that it feels so compact as every instrument and background effect seems to be of equal importance to build and shape the intended atmosphere. Of course, there’s great guitar parts (even if few bits are rather screechy) and groovy drumming, but while they might be significantly used as a trademark by other bands, in this case it’s the whole that matters and I quite enjoy this equity. Because the album is such an interesting challenge to most of the senses involved in comprehending it, anything less than the max score wouldn’t do it any justice. And don’t forget to go see them live, as they will be touring parts of Europe in September, together with Leprous.