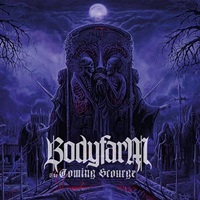 Death metal from the Netherlands, Bodyfarm subscribe to the tried and true principles of the genre on their second studio album "The Coming Scourge". The four-piece perform with the spirit of the early 90’s European scene in terms of their tones, production quality, and riff selection. The eerie horror trilling within "Frontline Massacre" which rolls into an evil growling escapade for guitarist/ vocalist Thomas Wouters, the sneaky slow riff roll against steady Mathieu Westerveld bass plodding that starts "Vortex of Terror", the lull of doom that signals "The Frozen Halls" as each measured word matches the depressive feel of the arrangement – Bodyfarm exemplify solid mechanics in terms of writing and performance.

I’m sure many will think of Entombed, Grave, and possibly a twinge of countrymen Hail of Bullets when taking in this album – the latter act making a guest appearance courtesy of guitarist Stephan Gebedi on the solo break for "Der Landkreuzer"). The band also tackles a classic Bathory song to end the album, "Enter the Eternal Fire" from 1987’s "Under the Sign of the Black Mark" – keeping a lot of the mood of the song with haunting keyboards and Viking spirit at the heart. Bodyfarm appeals to my youthful instincts- they don’t mess around and get right to the point with their riffing, keeping each arrangement bare bones and focused, even accenting trailing verses for key grunts or moans.

Favorites are aplenty. "Unbroken" with the stair step twin harmonies and scintillating traditional lead break, the faster "The Well of Decay" and aforementioned "The Frozen Halls" keep Bodyfarm high on my list of repeat listens when I need my old school death fix. The night sky, moonlit cover holds the key to "The Coming Scourge", another album to pick up if you love European death metal.