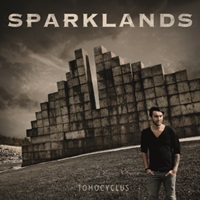 A Dutch act with a strong appreciation for the AOR/ melodic rock genre on their debut album "Tomocyclus", Sparklands means the world to the brother team of vocalist Thomas Riekerk and guitarist/ keyboardist Robert Riekerk. The studio musicians they assembled to work on this 14 song effort also show a world class respect and professionalism for the genre- intertwining their keyboard, synthesizer, and drumming skills a la the greats from Toto to Giant, FM to Chicago.

"Oasis" for instance has a cruise control series of guitar parts and background keyboards that remind me of "Cradle of Love" period Billy Idol if careen headlong into Bad English. "Shattered Dream" on the other hand has an almost new age meets Pogo/ Saga feel, pan flute overtones come in as Thomas’ tender vocals place the emphasis on beauty and tranquility, sure to gain female followers as a strong ballad should. Sometimes the multi-tracked vocal harmonies that come up on "The Feeling Is Gone" or "The Game" bring up Def Leppard during their "Hysteria" heydays, so be prepared for a super slick production that can make Sparklands compete with a lot of the veterans that they use as fuel for inspiration.

Robert flexes his bluesy guitar licks and technique on the namesake track "Sparklands"- an effort that I think would make Richie Sambora, Steve Lukather and Neal Schon very proud. As much as I love the genre though, I do think "Tomocyclus" could have done without a couple of lower key arrangements that drag towards the end of the album- "Let Sparks Fly" and "Open Your Eyes" would have been best served on a follow up effort, as its clear to offer the strongest material you can each and every time.

Sparklands are a great treat for those who love classic AOR done the American way- I can see the band only getting stronger as the years move forward.

DARK AGE – A Matter Of Trust