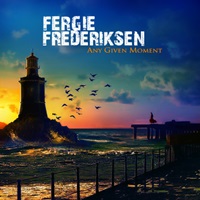 FERGIE FREDERIKSEN – Any Given Moment

62 years young, Fergie Frederiksen is most known in the melodic rock circles for his work on Toto’s "Isolation" album in 1984. Dabbling in music on a side basis while running a restaurant in the late 80’s and early 90’s, he’s worked on a couple of band projects and solo albums since- with "Any Given Moment" his latest effort on the table. Collaborating with keyboardist/ producer Alessandro Del Vecchio gives these 11 songs a sense of depth and honesty, emphasizing Fergie’s natural high range with a variety of classic rock and 80’s oriented material at the forefront.

The lineup also gravitates to strong players within the scene: guitarists Bruce Gaitsch (Richard Marx), Robert Sall (Work Of Art, W.E.T.), background vocals from Labyrinth’s Roberto Tiranti, and a guest duet with Issa Oversveen on the mid-tempo effort "Not Alone" (very Chicago oriented during their "19" days). Most vocalists would mail in their higher register days and seek out material in lower keys- but not so with Fergie. "Last Battle of My War" opens with some killer fretless bass lines from Nik Mazzucconi and a high energy drum groove from Herman Furin, setting up the verses with a dramatic up and down choral element as if taking in the best of Pride Of Lions, Meatloaf, and Toto. The follow up "Let Go" opens with a swinging keyboard riff reminiscent of "Hold the Line" before giving way once again to a fine Frederiksen upper range melody, Alessandro exploring old school organ antics to add another flavor to this classic-oriented arrangement.

The songwriting is at its best when the guitar leads are crisp and emotive and there is a perfect balance between a solid rhythmic groove and splashes of keyboard/ guitar riff spotlights going hand in hand with addictive vocal melodies- and for that reason "Time Will Change" and the sultry title track ballad are immediate winners to my ears. A cool bonus for those in the Toto know concludes the album as a brand new version of "Angel Don’t Cry" comes into play- Alessandro flexing his keyboard chops and Fergie giving the song a little bit more of a bluesy feel while still hitting those fine high parts in the chorus.

The man is fighting off cancer, so please support the best current melodic rock has to offer with new studio albums like "Any Given Moment".