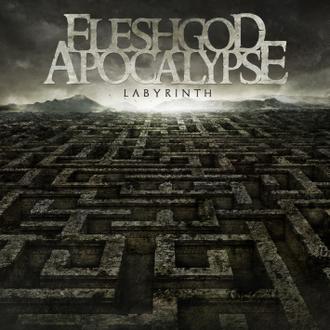 The third album from Italy’s Fleshgod Apocalypse illustrates the yin and yang of current metal songwriting/ production values. You have a sincere synthesis of symphonic orchestration and background vocal choir elements smashing headlong into a semi-technical death metal whirlwind- with the male extreme vocals assuredly keeping the quintet from total mainstream appeal. After a while the typewriter snare sound and inhuman double bass triggers wash all the charging instrumentation and intricacy away.

So while certain symphonic, classical elements please me in "Elegy" (the instrumental break particularly with the snare roll triplets) and the dramatic "Pathfinder" (think latter day Rhapsody gone death metal), overall "Labyrinth" just doesn’t flow well enough into strong, cohesive songwriting that people will retain and remember for the long term. Being extreme and dynamic with your ability is one thing- generating a buzz due to memorable arrangements is quite another.

Another medium effort that will probably find its way into certain hearts though, as Fleshgod Apocalypse aren’t clueless when it comes to performance and brutality.