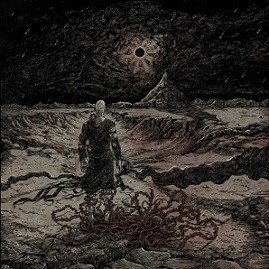 Even though this is my first encounter with the Icelandic entity known as Carpe Noctem I`m willing to declare right here and now that we`re dealing with a pretty special and awesome band. "In Terra Profugus" is the band`s first full-length album and it`s filled to the brim with great ideas, good musicianship, potential, energy, and atmosphere. The album consists of 5 rather long songs that flow together beautifully and create a fittingly complex soundscape that I find very fascinating and haunting.

The lyrics are in Icelandic and I`m sure that they complement the music rather well, because the moods that the music evoke are obscure, dark, occult, and at times even chaotic and apocalyptic. There are so many different elements in play on this disc that it`s rather difficult to sum up the music in just a few simple terms. Aggression, melody, dissonant riffs, mellowness, melancholy, utter darkness, grandeur…and I could go on listing a bunch of others, but I simply won`t as "In Terra Profugus" is meant to be experienced and approached with an open mind.

The musicianship is excellent and the vocals are quite diverse and convincing. A lot of changes occur throughout the songs and yet the strongest melodies and riffs are allowed go on just about long enough for them to become a little hypnotizing in places. The sound/production is dark and organic, just as it should be. I tried to think of a few bands that I could compare Carpe Noctem to, but no one comes to mind, so we`ll just leave it at that.

"In Terra Profugus" may not appear very accessible the first few times you listen to it, but that`s often the way it is with great and important records. Time and patience is required, but the end result will be well worth it. Black metal, avant-garde music, experimental stuff…I don`t know how to classify "In Terra Profugus", but that`s hardly important. Now if you`ll excuse me I think that I`ll get back to listening to this album once more. You know what to do, right?