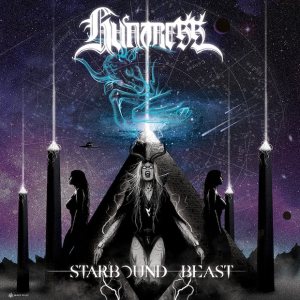 A friend of mine introduced me to Huntress a year or so back but like the sceptic I am I needed to see them live before I was convinced and could join the gang of Jill Janus worshippers (interpret that as you like). Huntress debut album "Spell Eater" had some quality material but much was on the shoulders of vocalist Jill and her quite varied voice.

A year later and "Starbound Beast" saw the day of light and I must say that my expectatins was sadly not met. Maybe my hopes where to high or maybe it was the hype Huntress achieved after their 2012 debut but I was hoping on a little more.

First, the material is very varied in both the quality and the cool departments. There are a lot of sweet riffing that reminds me of the devilish 80´s but the arrangments they are a context of does not allways deliver. The tempo and intensity is right there when its needed but there is something missing from the overall song writing process.

Second, the lyrics appear to be not that serious. They are well written but songs like I Want To Fuck You To Death does not do it for me. Yes I know that there´s an underlying theme beneath the words but unlike for example Ghost they do sometimes so appear cheezy instead of true.

Third, the production is great. The instuments all get their time in the spotlight and all are prominent in the mix, no complains there.

Fourth and finally. Jill´s voice is a good as ever. I really like her Doro sounding parts then suddenly we travel below ground and experience the evil angry other side of Jill and combined they work out great.

To sum it up. Huntress does not improve further on their great debut but dont stagnate either, they just dont deliver the goods that I was hoping for based on previous experience..

Either way, they are still a great live band and you can count me in at their next journy to Oslo. Their material works great live!