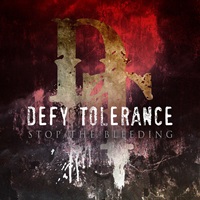 When done correctly, modern metal can display a muscular impact while also delivering some serious catchiness. Arizona’s Defy Tolerance lives in this world with their debut album "Stop the Bleeding". Forming in 2011 and developing their sound and lineup over the next year, imagine if you will a lot of the vocal power of Trapt and Sevendust against some of the energetic riffing and grooves that Alter Bridge and Godsmack famous- wrapped up around a drummer who knows his delve into progressive tempos when called for and then lay back into the pocket.

The one-two sonic punch of "Ball and Chain" and "Empty Bottle" starts Defy Tolerance on the ideal path, and over the course of the following 8 songs you’ll get a mixture of more mid-tempo, commercial oriented arrangements like "Epic Failure" and the semi-acoustic offering "No Complaints" going head to head with the more testosterone fueled "Suffocate" and lower register "Zombified". Guitarist Freddy Kilo and fellow axe man Brian Miller are a formidable duo, laying down a thick sound, accenting all the right melodies that keep the 3-4 minute songs moving at an impressive clip.

Freddy also handles the vocals, and his voice has aspects of Aaron Lewis from Staind, Chris Taylor Brown of Trapt, and a little bit of the current Shinedown/Alter Bridge arena rock harmonies that are necessary to keep this material careening about in your membrane. Gaining a seasoned veteran like Ken Mary (Fifth Angel drummer) to handle the production also gives Defy Tolerance an advantage in a market place where independent bands struggle to keep up with the signed acts due to budget constraints.

"Stop the Bleeding" will not be the last we hear from this fine quartet.