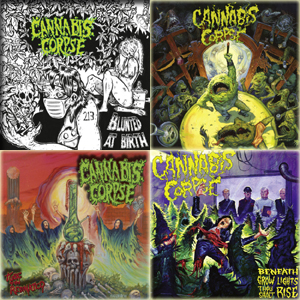 My first encounter with Cannabis Corpse was a couple of years ago when I took the time to check out their latest opus "Beneath Grow Lights Thou Shalt Rise". After a quick listen I realised that Cannabis Corpse have more going than just their name and some hilarious song titles.

This is a dead serious death metal band that really know how to cave your skull in with furious old school death metal.

Season Of Mist have now re-released all of CC´s back catalog (two full-lengths and two EP´s) and goddamn this is some good quality death metal if you look beyond the song titles and their primarly theme, smooking weed.

The band that primarly is based around Land Phil, more known from the thrash outfit Minicipal Waste released their first EP back in 2006. "Blunted at Birth" (haha, genious title) is strong piece of metal that consist of 7 quite entertaining death metal tracks all based on word play of Cannibal Corpse songs. The vocalist Weedgrinder (yes, you read it right) have an deep powerfull voice and really fits the clear production where all instruments all are prominent in the mix.

CC´s full-length debut from 2008, "Tube of the Resinated" is a masterpiece that I think the metal world have missed out on. This may be because of their "funny" name and that they somewhat where just considered as a side project at the time.

Again Weedgrinder does a fantastic job on the microphone and the material is as mentioned executed almost perfectly. This is top notch death metal, end of discussion.

In 2009, CC released their second EP "The Weeding" (guess witch Cannibal Corpse album that title is based on). This album is not the best follow up to "Tube of.." but somewhat a more chaotic album where the song structures does not flow that well. Also the vocal job by Weedgrinder does not match his previous work. It seems to overdone and it sounds less organic and real than earlier. All in all an ok release but by far their weakest.

In 2011 came their as of now CC´s latest full-length "Beneath Grow Lights Thou Shalt Rise", the album I heard first and that introduced me to CC in the first place.

Personally I think this album is weaker than "Tube of the Resinated" but much of that is based on the production. The sound is way to plastic but the material is not that bad with a lot of cool riffing and some furious hooks to bang your head to.

Land Phil proves himself as an excellent guitar player and some of their stuff is more technical than their idols, the real deal godfathers of extreme metal, Cannibal Corpse.

All of the Cannabis Corpse releases have been on different obscure labels with limited pressings so it´s cool that Season of Mist now re-release all four albums so that Cannabis Corpse can get the recognition that they deserve on a bigger scale.

Their death metal is really up there with the leaders of this league and if you´re into Cannibal Corpse (and who is not?), this is mandatory listening!