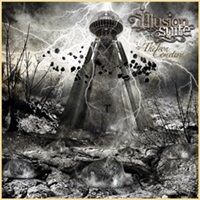 The second album for Norway progressive metal band Illusion Suite comes with a series of changes. Relinquishing themselves from Limb Music, the quartet sign with Power Prog Records in Europe and Nightmare Records for North America and gain a new guitarist with Kim Jacobsen taking over for 8 year veteran Oyvind Larsen. "The Iron Cemetery" is a rather short affair for this genre, especially with a band that is more melodically inclined as they are- the whole 9 track effort clocks in at a little over 38 minutes.

Do not let Illusion Suite fool you with its brevity- as the style the four-piece display is very vibrant, shimmering with neo-classical, power, and heavy elements amidst the obvious intricacy and technical prowess at hand. Vocalist Bill Makatowicz continues with a soaring high pitch range reminiscent of singers like Pathosray or Labyrinth- although he has learned to develop more of a cunning lower range a la Roy Khan or Nils K. Rue of domestic progressive metal leaders Pagan’s Mind. Musically the band combine a lot of the syncopated guitar/keyboard tandem flair that made Dream Theater and Symphony X superstars along with a European sophistication that has helped elevate Evergrey and Tad Morose to modest levels of respect.

Even when the band enter slight electronica-territory for an instrumental part in "The Ugly Duckling", they follow up the next segment with some free form progressive bass moves out of Dag Erik Johnsen that will stun and stir their audience in the right direction. Overall the winners include the heads down progressive monster "Orpheus’ Quest" that sets the heavy tone from the beginning, the bouncy "Nero" where drummer Roger Bjorge deftly speeds up and slows down his tempos with the changing mood and dynamic tides and the forceful closer "Premonition" which could be Bill’s best vocal delivery for the band to date- multi-faceted, expressive in a multitude of ranges, and hitting some serious high notes.

"Final Hour" was a great debut album for Illusion Suite back in 2009, but I think "The Iron Cemetery" is a career defining record- and one that will turn many heads in the progressive metal world in the right way. Kudos!

IMPLODE – Under A New Sun