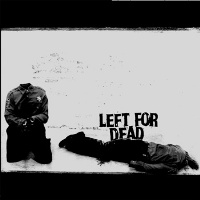 LEFT FOR DEAD – Devoid of Nothing

Somewhere around the mid 90’s Ontario based hardcore punk act Left for Dead decided to hang up their guitars, leaving a relatively scant record of their existence. Sadly, this meant that they didn’t reach their deserved audience before they exited the stage.

2013 saw the band get back together, playing their first gigs in 17 years. "Devoid of Nothing" is a compilation of everything the band released in various forms prior to their demise. Stylistically their work is the same vein as Final Conflict, kind of like a modernised Minor Threat with nods to grindcore thrown in with apocalyptic breakdowns and short blast sections.

It is a real pity that there aren’t so many bands playing this type of thing these days. Ok, there are but in my opinion not many of them are doing it very well (LA’s Bullet Treatment being an overwhelming exception). If straight up hardcore punk in a 90’s style is your thing, then LFD is well worth checking out. Let’s hope they can continue to produce the goods when it comes to recording new material so they finally get to that audience.

ORPHANED LAND – All Is One