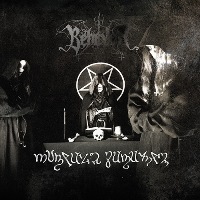 In my opinion Finland has become a bastion of orthodox Black Metal over the last decade. Whilst acts from other countries have done more to stretch the boundaries of the genre, it seems that the taciturn Finns have concentrated on milking as much as they can from the formulas created by the second wave of BM.

Behexen are among the most widely-known and exalted denizens of that cabal, and with good reason. Ever since the turn of the millennium they have occupied a central place in Finnish BM and "Rituale Satanum" is the album that marked their debut and helped codify the defining characteristics of the scene’s sound, intentionally or not.

"Rituale Satanum" ticks a lot of boxes. It is cold and hate filled, but the rhythmic sections have a subtle, otherworldly warmth. What impresses most is the way Behexen can introduce a touch of melody without compromising the blasphemous feel of their music. Brutality and evil mid-paced groove are blended well and the riffs and structures all contribute to songs that work rather than just existing for effect or atmosphere. In terms of approach, this record takes up from the Gorgoroth sound of the mid 90’s, but still incorporates the vibe of the first wave of BM, so will satisfy those who like their darkness served old-school style.

I’m not the greatest fan of Hoath Torag’s voice on this record (or anywhere to be honest, although Behexen and Sargeist are probably my favourite ‘straight up’ BM bands) – it is a bit too high pitched and lacks variety, so at best it does the job and at worst there are times that it calls to mind Donald Duck possessed by Satan.

Having said that, this is a classic of modern BM and anyone with an interest in orthodox/Finnish BM or who are fans of Horna & Sargeist will love it.

IMPLODE – Under A New Sun