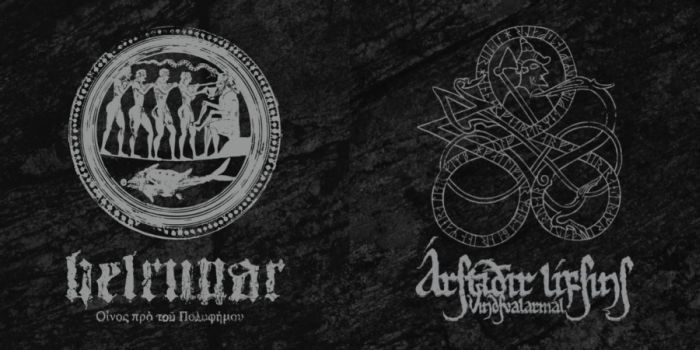 This split LP/CD by Arstidir Lifsins and Helrunar is a beautiful piece of introspective and philosophical music. Both bands have contributed one long and epic track each to this release, but whereas Arstidir Lifsins taps into old norse mythology Helrunar leans toward some of the ideas and themes set forth in Homer`s "Odyssey".

The song "Vindsvalarmal" by Arstidir Lifsins is a moving, melancholic, grand and sweeping piece of work that clocks in at 20 minutes. Everything from the downright sad-sounding introduction to the spoken words scattered throughout the song and further on to the aggressive outbursts fit and blend perfectly together, which leaves us with one breathtaking musical journey through the pagan heartlands of mind and body that I am only all too eager to take part in. Don`t come running and tell me that those clean-sounding chants or the mellow guitar-parts or even the string arrangements don`t move you you in some way. Yeah, I figured as much. There`s something deep, bombastic, atmospheric and haunting about "Vindsvalarmal" that keeps lingering in my mind after having listened to it and that is most definitely a good thing. A highly recommended listening experience for those of you who are open-minded.

"Baldr ok Iss" by Helrunar didn`t do that much for me when they released it back in 2007 and I haven`t really bothered to check up on those guys since then, but maybe I should have, because their side of this split release, which consists of the song "Wein Für Polyphem", is a well-composed and nicely arranged song that is quite moving in its own way. It`s not as good as "Vindsvalarmal" by Arstidir Lifsins, but still, it`s a very cool track. It`s slightly more hypnotic and aggressive compared to "Vindsvalarmal" and yet it retains that same sense of having some depth and substance to it as the aforementioned piece. It sounds much more rooted in (black) metal as opposed to Arstidir Lifsins, which comes across as a little more folky sounding than Helrunar, but I must stress that these two bands complement each other because they each have a sound and identity of their own, which is a hell of a lot more than I can say about so many other bands out there.

All in all this is a very good release and I hope that people will pick up on this, because it certainly deserves a wide audience in my opinion. Neither of the two bands are predictable nor do their musical experiments and mixing of genres overshadow the fact that they`re damn good songwriters and arrangers that are able to make their songs flow beautifully. Like I said, this is a highly recommended release.

TO THE PAIN – To The Pain