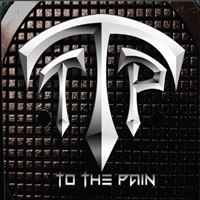 TO THE PAIN – To The Pain

Long Island, New York band that began in early 2012 and release their debut self-titled album. To The Pain is a five-piece outfit with a lot of traditional power riffs and melodic harmonies, more in line with the late 80’s movement when Metallica was slowing down and a lot of ripping guitarists were getting attention from groups like Racer X, Queensryche, and King Diamond.

The basic riffing and 4/4 drum tempos with occasional double bass use for flash within "City of Flames" and "Burn With Me" meld together a little of the early West Coast hard rock sound (Ratt, Black N Blue) with the Priest/ Accept type power – and the highlights within these 7 songs definitely resides in the schooled shredding of guitarist Steve Shaver, who knows a lot of neo-classical, Shrapnel-era technical ability within his repertoire.

But early in the game on opener "For the People, Buy the People", the main vocals from John Intagliata just rubbed me in that ‘nails across the chalkboard’ wrong way- rough and tumble in the lower stretches, but totally out of his element when reaching for those Halford/ Tate-like screams. "Fuel Injected Nightmare" works best with the gang chorus vocals, as his individual sneers and taunts induce laughter rather than metal conviction.

I’m all for acts delivering old school metal- but most that seem to be doing this style well hail from South America or Scandinavia, and To The Pain is quite a few notches below the work of say Wolf, Enforcer, or Hibria at this point. Maybe this is just early growing pains and their second release will see marked improvement, but for now To The Pain is average at best in this genre.

NIGHTBLADE – Closer to the Threshold