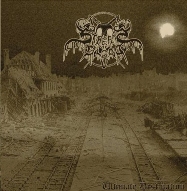 The German black metal band named Streams of Blood released their second full-length album not that long ago and named it "Ultimate Destination", and let us take a closer look at that, shall we?

Streams of Blood perform aggressive, violent and quite catchy black metal in the vein of bands such as Marduk, Triumphator, Panchrysia and Kriegsmaschine, all of whom I like very much. "Ultimate Destination" contains a creepy and atmospheric intro and 9 songs.

Luckily, "Ultimate Destination" does not sound sterile or clinically cold in terms of its production and sound. On the contrary, it sounds pretty organic, massive and vibrant to me, which compliments and underlines the dark and violent atmosphere of the songs. All instruments are rather well-played and the musicians clearly know how to arrange their songs to great effect in terms of adding variation and dynamics to them. Also, the album is quite consistent in that none of the songs are weak or boring. They all contain just about enough good traits to keep them well above the level of mediocrity. The songs do not outstay their welcome either by being too long, and once more I have to point out that the music is damn catchy and memorable. The vocals are also well executed and sound neither weak nor lame. Check out the songs "New World Order 2012" and "Temple of Blood" if you don`t believe me.

This album took me by surprise and I must say that I`m very pleased with what these gentlemen have come up with this time around. "Ultimate Destination" is highly atmospheric, eerie and well-written without being pseudo-intellectual or progressive by any means of the imagination. Fans of orthodox black metal bands, especially those hailing from Sweden and France, should give Streams of Blood a chance, because they most certainly deserve it in my opinion.