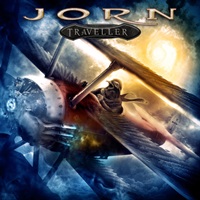 The eighth studio album under the Jorn moniker features a new songwriting partner in Wig Wam guitarist Trond Holter who joined the band with fellow Wig Wam bassist Bernt Jansen in the fall of 2012. "Traveller" is similar to what you’ve expected through the years- a melodic hard rock/ metal effort with a boatload of influence in the Dio/ Rainbow/ Whitesnake camps- with the powerhouse, bluesy melodies from Mr. Lande gliding effortlessly over the top of the mix.

Trond and Jimmy can layer their riffing and solos in such a way as to evoke Blackmore meets Iommi one moment with "Cancer Demon" and then follow it up with an 80’s Whitesnake-like spirit for the groovy "Rev On". You can also expect one epic with that classic 70’s/ early 80’s feel- and "Carry the Black" is probably the favorite on the album, Jorn and his band mates balancing out the sustained note holding with this doomy meets crunchy marching arrangement. With Jorn and Trond handling the production duties capably, the 10 songs on "Traveller" offer the usual range of mid-tempo rockers, anthems, and slower, epic type numbers that will get you singing or air guitaring along in no time. Closer "The Man Who Was King" is a tribute to fallen hero Ronnie James Dio, and I’m on the fence about liking this as some of the lyrics can get a tad ‘cheesy’ (‘the Jesus of Heavy Metal’ for instance…).

I believe his best work is "The Duke", along with the second album he did with Masterplan "Aeronautics"- but "Traveller" will not disappoint his long time legion of followers. You often wish that Jorn would inject a little more dynamics into his formula though- he has the talent and the players in place to pull it off. Oh well, there’s always next time…