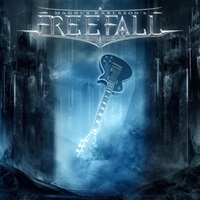 Guitarist Magnus Karlsson may be best known as a songwriter and producer working with Allen/ Lande, Starbreaker, and Kiske/ Somerville among others- as well as joining the veteran power metal outfit Primal Fear in 2008 and being a recording/ touring partner with them ever since. Here he is with his first solo venture, a 12 song excursion into melodic metal/ hard rock territory complete with some of the better vocal support one could ask for in the business. Russell Allen, Ralf Scheepers, Tony Harnell, Mark Boals, David Readman, Rick Altzi, and Mike Andersson to name but a few- along with drummer Daniel Flores.

Magnus handles the lead vocals for three of the tracks- the commercially bouncy "Heading Out", the splendid harmony filled Whitesnake-ish "Ready Or Not", and closing, half acoustic / half electric power/ AOR number "On Fire"- and I’m really surprised he doesn’t exercise more of this aspect in future projects as he has a clear understanding of power and melody within his voice, well suited for the melodic hard rock genre. Obviously the heavier offerings such as "Free Fall", power metal oriented "Higher", and "Us Against the World" benefit from the professionalism and care put in by Allen, Scheepers, and Readman respectively- and who else can handle a semi-sensitive commercial-like ballad with "Stronger" much like Tony Harnell, recalling his best work in TNT and Starbreaker.

No one will question Magnus’ obvious skill set in the schooled lead breaks, but I hope more people will really delve deeper into the man’s talent for writing killer melodic metal / hard rock songs- the hooks easily gaining space in your brain and worthy of wider attention. You can even hear him reaching back into some of his early Iron Maiden influences with the opening guitar/ drum syncopated salvos throughout "Not My Saviour"- one of my favorites on an album jam packed with upper tier material.

Magnus succeeds because he truly is an admirer of these singers and puts them in situations where their best skills shine through. Brilliant and assuredly a must buy for those into melodic metal, power metal, AOR, and just great guitar hero music paired with outstanding vocalists.