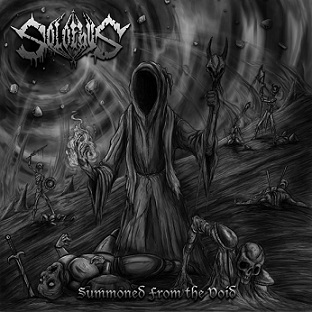 SOLOTHUS – Summoned from the Void

Solothus from Finland were formed in 2007 and released their first demo in 2011. "Summoned from the Void" is the band`s debut album, and I`m willing to let you in on a little secret right here and now; their debut album is a damn fine and well-crafted slab of heavy, bone-crushing doom/death metal. So there you have it, but let`s get on with it, shall we?

The album contains 6 rather long songs in the sense that are nearly all somewhere between 7 and 11 minutes long. "Frostbane Overture" is basically an organ-driven piece that sounds like something right out of a funeral. The second track, "Hordes of the North", is a doomy and bombastic piece that has a claustrophobic feel to it. The same could be said for the remaining songs on the album. Slow and hypnotic pieces such as "Plaguewing" and "Upon Shattered Lands" work well and really get under one`s skin after repeated listens. The title track doesn`t do that much for me, however.

Even though a lot of parts are somewhat monotonous the band members do manage to vary the songs and riffs throughout so that one doesn`t lose patience or focus when listening to the album. Once in a while the band quickens the pace a little and goes from slow to mid-tempo, but without losing any intensity or atmosphere. The lead-guitar parts are also rather tasteful and complement the rhythm guitar and the big, open chords rather well. The vocals are deep and growled, which is cool most of the time, but it would have been nice if the vocalist had varied his sound and expression just a tad more. The deep and murky bass is also audible, which is something that other bands could learn from. What can I tell you? I love bass melodies that are upfront in the mix. So sue me!

Solothus may not be the most original or innovative band on earth, but what they do they do really well, and for that I applaud them. It`s not something that I would listen to everyday and I can imagine that it serves its purpose best on a dark and depressing day as the music is far from uplifting. If melancholic and unsettling doom/death metal is right up your alley then give "Summoned from the Void" a chance. "Summoned from the Void" is a good and solid piece of work.