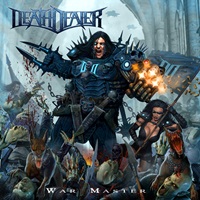 When you assemble veterans in the traditional / power metal scene together like guitarist Ross The Boss (ex-Manowar), vocalist Sean Peck (Cage), guitarist Stu Marshall (Empires of Eden), bassist Mike Davis (Halford, ex-Lizzy Borden) and drummer Rhino (ex-Manowar), it’s little wonder that the underground and press take notice. Welcome to the world of Death Dealer and their debut album "War Master"- a 10 song platter sure to appease those who love tasty power riffs, multi-octave vocals, and a rhythm section that understands the ethics of US power metal.

Songs like the stirring ballad "Children of Flames" (think Priest meets Queensryche), double bass monster "Death Dealer", and dual harmonic oriented anthem "Liberty or Death" (punctuated with a lot of American national spirit in the guitar harmonies and lead work from Ross and Stu) scream for a time when "Painkiller" shocked the world, when Iron Maiden led the British brigade, and when American bands like Anthrax and Agent Steel started picking up more consumers due to their intensity and speed. Those who aren’t aware of Sean’s killer high piercing screams will fall head over ears at his work within "Heads Spikes Walls" and the Thin Lizzy-esque "Never to Kneel" (where Sean also features a tamer, almost playful nature during the verses). Ross The Boss and Stu Marshall are a formidable guitar tandem, handling a lot of the stair step galloping riffs in the title track in stride before bouncing back into heads down power delivery.

Do you miss the impact Riot made with "Thundersteel"? Have you lost excitement in the new generation of power metal bands from around the globe? Death Dealer bring back those feelings to me with "War Master"- and hopefully can give all generations of power fans a rallying cry to keep the movement thriving. Raise your fists to the sky, bang your heads ‘til your ears bleed, let’s hope this is the start of a long, prosperous career for the band.