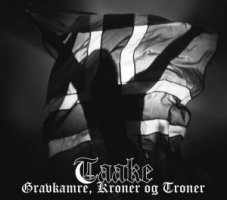 "Gravkamre, Kroner & Troner " is a 2CD Set released to commemorate 20 years of Taake.

It contains alternate versions or well-known album tracks such as "Hordalands Doedskvad 1" , "Over Bjoergvin Graater Himmerikk 4" and "Nattestid ser Porten Vid 1" along with cover versions such as Von’s "Lamb", Burzum’s "A Lost Forgotten Sad Spirit" and Emperor’s "I am the Black Wizards". On top of that are 2 completely new tracks.

I am a fan of Taake, especially the earlier stuff, but I have to report that this collection is a bit hit and miss. There are moments of sublime black and roll and blistering flat out BM that will remove your eyebrows, but there are probably even more parts that don’t hit the spot at all.

"Gravkamre, Kroner & Troner" is one for the hardcore fans and completists only. Those new to the band would be best off starting with one of the studio albums.