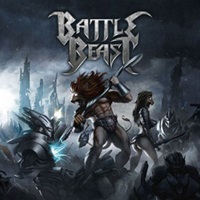 You have a lifetime to create your first album and maybe six months for the follow up- if you are lucky and fortunate to be busy touring and promoting on the road to success. The self-titled second album from Finland traditional metal act Battle Beast is a 13 track effort with slightly commercial/ gothic leanings- still using the Warlock/ U.D.O. anthem template of songwriting. Problem is, keyboardist Janne Bjorkroth overrides a lot of the guitar parts from Anton Kabanen and Juuso Soinio with a sugar sweet tone that weakens the ‘metal’ impact.

As good as power numbers like the double bass driven "Raven" or mid-tempo Accept-like "Over the Top" are, the cyber-electronic nonsense throughout "Necromancer", the Middle Ages interlude "Golden Age" and dramatic balladic buildups for "Black Ninja" take Battle Beast into directions that polarize followings. Vocalist Noora Louhimo has a strong personality and power within those pipes, channeling elements of Leather Leone, Doro Pesch, and others in the early 80’s female classic status.

To my ears I feel that Battle Beast is trying too hard to please a number of different sub-genres within the metal contingency, rather than focusing on a particular style and going with it. As such, the confusion means a lot of good moments riff-wise, but not a lot of distinctive, outstanding songwriting. Who knows, the ship could be righted on the third album- but for now "Steel" is the better Battle Beast record by a long shot.