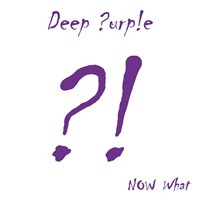 The old guard keeps pumping out quality material, knowing how to keep the songwriting machine rolling even as they enter their twilight years. Deep Purple release "Now What?!"- their first studio album in 8 years, and it’s like their bluesy based hard rock has not lost any of its musical texture, muscle, or superior catchiness. I understand that Ian Gillan may not be hitting those "Highway Star" shrieking moments – but he still navigates deftly around these lyrics with magical mystery and exotic slopes on "Weirdistan" and the slightly jazzy "Body Line".

Ex-Rainbow keyboardist Don Airey has now been with the band over a decade, and to these ears he replaces Jon Lord with the same ability to lead the charge without overstepping guitarist Steve Morse’s riffing and clean breaks. The two work off of each other beautifully on the relatively up tempo "Hell to Pay", and also painting the right light brush strokes on the 7 minute tender epic "Uncommon Man" where Morse delivers some stunning solo parts remindful of classic Neal Schon and Gary Moore. If there’s an area that many take for granted when it comes to Deep Purple, it’s the importance of the rhythmic backbone of bassist Roger Glover and drummer Ian Paice. All over the place their abilities shine, grabbing the right tempo and root notes, but also knowing when to accent a part with some sparkling technicality- check out "Apres Vous" and "Out of Hand" for their dual expertise that keeps each song fresh and special.

Deep Purple remains vital, and continues to have something great to offer the world. Channeling their energy into different facets of mid-tempo arrangements and exotic elements, "Now What?!" proves you can mature gracefully and still maintain your legendary status on the hard rock community. I’m hopeful that this album will gain decent appreciation from the younger generation as "Machine Head" and "Perfect Strangers" did for previous generations.

Please let this not be the last Deep Purple studio album- but if it is, they’ve gone out with grace and dignity fully intact.

EXELOUME – Return of the Nephilim EP