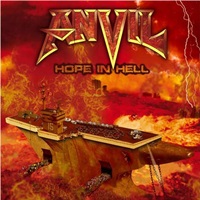 Now that the buzz is subsiding from their award winning documentary "The Story of Anvil", Canada’s Anvil can’t complain about being underrated no longer. The alliteration theme for album titles continues with their new studio album "Hope in Hell"- their 15th in 32 years. Receiving the bonus edition of the album with 13 tracks instead of the normal 11, the early background information regarding this record is more of a return to the old school spirit of Anvil’s early 80’s catalog. With latest bassist Sal Italiano (ex-Cities) now firmly entrenched in the trio, there’s one thing you can be certain of when it comes to the band- they will not stray far from their traditional metal and power roots.

The title track opens with that slower, lumbering riff and equally doomy overtone in Lips’ vocals- a sister cut to "This Is Thirteen" or "Forged in Fire". "Eat Your Words" is a faster double bass oriented number with Robb Reiner delivering those killer quick hitting fills he’s become famous for, the timing between Lips and Robb when it comes to the transitions sonically tight and something you can’t teach the new generation- it has to be felt, heard, and practiced. "Through With You" nicks the riff we all learn on guitar if we want to play hard rock, "Smoke on the Water"- and as such is the first ho-hum song that can be left for dead in my opinion, even with the ‘see you next Tuesday’ veiled lyric reference point.

I do feel a lot of the dynamic swings that were present on albums like "Metal on Metal" and "Forged in Fire" in the material on this record – as Anvil know how to dig into those catchy power hooks for highlights like "The Fight Is Never Won" and the AC/DC-ish "Time Shows No Mercy". On the minus side, a lot of the lyrics point out Anvil’s propensity for low brow rhyme schemes or cliché themes such as "Bad Ass Rock ‘n Roll" and angry ranting with "Shut the F… Up", where I wish Lips would raise the bar with his words.

Following the band for three decades, I’ll say that "Hope in Hell" is stronger overall that their last album "Juggernaut of Justice"- but still doesn’t compare as highly as their first three album output. They certainly entertain in a live environment- so as such I’ll keep supporting Anvil when they come around on tour.