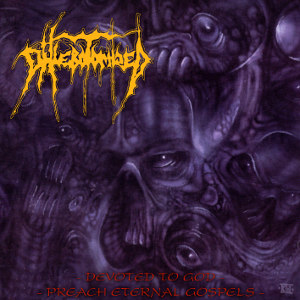 Phlebotomized are one of those obscure death metal bands from the early 90´s that among many others of the same period now have their back catalog remastered and re-released for your listening pleasure. Vic records have compiled the demo from 92 "Devoted to God" and for some reason their second EP "Preach Eternal Gospels" from 93 (and not their first EP "In Search of Tranquillit") into about an hour worth old school death metal with a ton of influences from the US band Nocturnus.

The dutch fivesome incorporates a lot of keyboard into their metal and that was quite uncommon before Nocturnus made it legitme with their fabolous debut "The Key" from 1990.

Phlebotomized´s metal is quite catchy and atmospheric (much thanks to the keyboard) and their vocalist is really deep into the cookie jar for their time beeing. Reminds me of early Xysma (FI). This is an interessting listen for those that value the history of death metal. The band did not get anywhere and folded after two full-lenghts back in 97 but their legacy deserves to be recognized because what they deliver here is right below top notch some 20 years ago. They have a lot of intricate arrangements that fits their riffing very well and again, the keyboard works really good to create a whole musical picture that deserves to be listened to from time to time.

EXELOUME – Return of the Nephilim EP