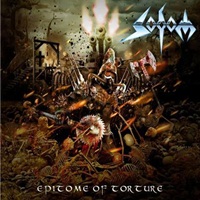 When it comes to the Teutonic Three of Thrash, there’s Kreator, Destruction, and the band under the microscope for review currently, Sodom. We can debate the best out of the three until the cows come home over their long histories, but when it comes to pure passion for thrash – especially with no chance of a ballad in sight- this trio dole out the goods. "Epitome of Torture" is their latest studio platter, complete with new drummer Markus ‘Makka’ Freiwald wielding the sticks as bassist/vocalist Tom Angelripper and guitarist Bernemann keep the trio engaged with 10 songs of mid-tempo anthems and slightly faster offerings sure to make Sodom maniacs scream loud and proud.

"My Final Bullet" may start off with a tranquil guitar passage and a load of half time snare/ china crash antics, but 52 seconds later the blistering uppity charge of Bernemann’s picking, Tom’s vocal roar, and the quick hitting snare/ bass /fill combinations from Makka will send adrenaline across every fiber of your being. The harmony elements during the lead break also add a slight nod to the traditional scene. The follow up "S.O.D.O.M." has a call and response chorus ensuring maximum larynx damage for the audience in live clubs and arenas this coming tour, while "Stigmatized" in its 3 minute time frame reminds me of "Persecution Mania" era Sodom with a punk attitude, the guitars and bass whirring about as one with a steady, straightforward thrash back beat.

The bass rumbling that opens "Invocating the Demons" signals more of a militant march, another area that Sodom consistently explore as the years go by- intertwining this mid-tempo attack with occasional bursts of faster blasting as if letting off a load of gunfire. Another highlight is the Motorhead meets Tank inspired "Into the Skies of War" – the opening riff very reminiscent of the latter while the lyrical delivery more in line with Lemmy (albeit with Tom’s raw, caustic delivery). Producer Waldemar Sorychta returns to handle the boards, and his attention to tightness and performance allows Sodom to balance their natural aggression with surprising flashes of impressive musicality and melody.

A logical follow up to "In War and Pieces", Sodom prove that thrash is not merely a young man’s style but can also deliver professional results in the hands of mature and capable musicians.