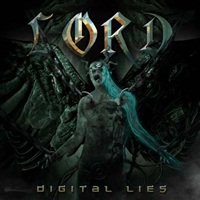 Australia may be remote, the ‘land down under’ as made famous by Men At Work in their 1980’s international hit, but that doesn’t mean there isn’t a burgeoning metal scene ready to take the rest of the world by storm. Almost any kind of metal currently popular in Europe and North America can also be found in Australia- often without a lot of the record company / major media trend trappings that can water down sounds. Take the four piece Lord for instance.

On the surface, their sound is very power metal oriented- strong guitar harmonies and melodies, loads of impressive double bass percussion, and vocals that can gain a modest amount of audience sing-a-long response. Coming into existence in 2005 after the demise of Dungeon, guitarist/ vocalist Lord Tim and his compatriots (guitarist Mark Furtner, bassist Andy Dowling, and drummer Damien Costas) have been pouring out EP’s and full length albums, expanding their horizons with outside influences from the hard rock, thrash, speed, and traditional metal communities. "Digital Lies" contains 11 songs (13 if you pick up the deluxe version) and wins me over instantly because of its careful attention to strong hooks, dynamic arrangements, and overall professionalism in every aspect from cover art to production values.

Be it Blind Guardian-like speed guitar harmonies in "Point of View", Firewind meets Leatherwolf mid-tempo guitar hero riffing intertwined with steady double bass pounding on "Betrayal Blind", on through to the 1:57 neo-classical guitar instrumental dual Lord Tim and Mark employ for the Dragonforce meets Yngwie Malmsteen-ish "Because We Can", the listener understands that Lord wants to give out every twist and turn imaginable in a genre more well known for clichés, not innovation. Even 8 minute plus epics like "The Chalkboard Prophet" and closer "Battle of Venarium" deliver with storytelling, appropriate riff variety, and the multi-level vocal harmonies (all 4 members handling backing vocals) so that you never feel lulled into sleep.

A lot of what I hear on "Digital Lies" seems to be a great synthesis of German acts like Mystic Prophecy and Brainstorm, along with the classic American work of say Jag Panzer and Leatherwolf- while keeping in mind the accented nuances of speed, thrash, neo-classical, and traditional metal discussed earlier. Overall the performances are high caliber, and those looking for something solid in the power genre will be more than impressed with Lord. Picks to click include the aforementioned "Betrayal Blind" and the Vicious Rumors-like crusher "Final Seconds".