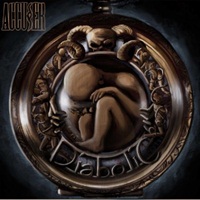 German thrash band Accuser should be familiar to most in the underground- they’ve been active in one form or another (outside of 4 years from 2004-2008 as Scartribe) since 1986. Back in my in print fanzine journalism days, I reviewed the band’s fifth album "Reflections" in 1994- but can’t really remember much beyond a semi-technical meets Bay Area sound that didn’t really resonate with my ears. Alas, the past is the past- so with renewed interest I dig into their ninth studio record "Diabolic".

The first task that can seem insurmountable is the sheer length of this album- as the 10 tracks average out at 6 minutes a clip, and a 61 minute album better have enough variety in terms of riffing and tempos or this could be a cliff diving expedition to try to mine gold. Fortunately for the quartet, there is plenty of riveting guitar triplet action that rivals some of the best work heard from Testament, Forbidden, and Chicago, IL’s much missed Znowhite/ Cyclone Temple- check out the heads down riffs within "Cannibal Insanity" and the mid-tempo flurry "Immortal Aggression" that will melt steel on impact. The guitar duo of rhythm guitarist /vocalist Frank Thoms and lead guitarist Uwe Schmidt is razor tight, keying in on all the right stop/ start moments and times to deliver key lead breaks- the title cut never wavering in any aspect for total domination.

Yes, there are a couple of elements that will signal possible plagiarism flags- the opening riff on "Remains of Hate" certainly has a lot of Slayer "Black Magic" elements to it (albeit at a faster clip) and Frank’s vocals certainly owe a lot of inspiration to Max from Sepultura during his "Beneath the Remains" days. Overall though, "Diabolic" should appease those thrash maniacs who dig a lot more power tight triplet riffs and equally impressive drum chops- which we don’t get enough of these days. Safe to say Accuser is heading in the right direction, and hopefully more fans will give them another chance.