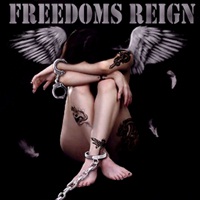 When a veteran of the early New England metal scene comes out with a new band, my ears perk up- such is the case with ex-Fates Warning guitarist Victor Arduini. Leaving after "The Spectre Within" release in 1985, he returns in 2011 with this Connecticut based four-piece Freedoms Reign, unleashing a debut 9 song album brought to the attention of Cruz Del Sur Music thanks to the label head’s long-time friend Tom Phillips (While Heaven Wept).

Victor tackles the vocals in addition to his exemplary axe duties, and he’s joined by second guitarist Tommy Vumback, bassist Michael Jones, and drummer Chris Judge- delivering a sound that gravitated to the 70’s proto-metal riffing with occasional nods to doom and classic heavy metal. A lot of the dual harmonies within "Shadow of a Doubt" for instance have appeal to Maiden/ Priest fans just as much as they will to people into Sabbath or Mercyful Fate. Victor’s voice has that eeriness coupled with clarity that wouldn’t be out of place during those early NWOBHM days. Drummer Chris Judge gets his gallop groove on for the follow up "Brother", unveiling some sweet fill rolls and superior cymbal to snare syncopation.

Freedoms Reign has that special knack for driving the right riff home- Michael Jones’ bass work signals this crushing rhythm guitar hook for "Up From Down" that is one part early Rush (think a touch faster "Working Man") with a boatload of Trouble and Solitude Aeturnus in the mix, and a little later this spider-web, wah-wah filled circular riff for "No Excuses" transforms into another head splitter in line with "Symptom of the Universe".

Expect a better than average production with equal emphasis for all instruments, and overall I think Freedoms Reign can really charge up a crowd with their classy framework and emphasis on the roots of hard rock and heavy metal. Those expecting Victor to re-create his early Fates Warning years will be a tad disappointed, but the proof in ability is in these tracks- and as such this is a blazing effort.