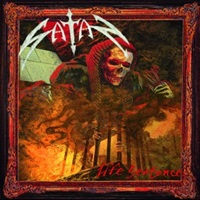 Originating from Newcastle, England in 1980, Satan is one of the more notable acts in the NWOBHM movement. Their debut album "Court in the Act" from 1983 is often cited as one of the top 10 studio albums from that sub-genre. Inactive for quite a while (but still active with other bands like Blitzkrieg for vocalist Brian Ross and Skyclad for guitarist Steve Ramsey and bassist Graeme English), Satan reunited in 2004 for Wacken Open Air and with their original lineup in 2011 for the Keep It True festival. So here we are 30 years after their debut album and the quintet (rounded out with guitarist Russ Tippins and drummer Sean Taylor) return with a fresh studio record as if they haven’t lost a beat.

The 10 song "Life Sentence" album doesn’t start with this ominous piped in atmospheric intro- the twin spider web guitar harmonies and straightforward pounding drums instead signal "Time to Die", one that will roust the long time Satan followers into fervent chanting and clapping fits. "Twenty Five Twenty Five" features Brian’s confident, robust heavy metal pipes- charming with that British sensibility at hand to make the riffs that much more memorable. Expect a raw production more in line with their early 80’s days- which I thoroughly enjoy as you can feel the nuance of every snare hit, each bass pluck, and the simultaneous picking maneuvers from the Ramsey/ English team.

Satan’s sound just has this total go for it mentality, with faster songs like "Siege Mentality" and the driving "Testimony" riding gallantly next to the more complex efforts such as "Personal Demons" and the Iron Maiden-esque "Cenotaph". A danger exists that as musicians get older, they take in new influences and then incorporate them into their stock in trade style- diluting or tarnishing their cherished discography. In the case of "Life Sentence", Satan stick to those heavy trademarks that made "Court in the Act" a classic, and I think this could rival Attacker’s latest for one of the best traditional offerings of the year.

Let this not be a one and done studio album reunion. I’m delighted to see the genre get its just rewards, as "Life Sentence" captures all that I desire from this style.

REDRUM – Victims Of Our Circumstances