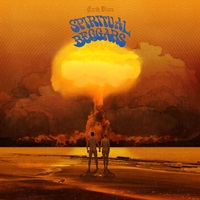 Psychedelic stoner oriented hard rock returns from Arch Enemy’s Michael Amott in the form of his long running side project Spiritual Beggars. "Earth Blues" is the eighth studio album since the band’s start in 1992, and second with ex-Firewind vocalist Apollo Papathanasio helming the microphone. With the current explosion of younger artists reverting back to the roots of hard rock and churning out their own creative interpretations, it’s exciting to know that this should benefit artists like Spiritual Beggars who play what they feel regardless of the ‘trend’ at the time.

"Earth Blues" would not be out of place in 1973 as an album: take in the larger than life snare sound with swing appeal from drummer Ludwig Witt, or the soothing organ chords from Per Wilberg filling in the mid-range. Crank up the low end to be mesmerized by bassist Sharlee D’Angelo’s see-saw work as he can groove one moment on opener "Wise As a Serpent" and then provide the right launching platform for Amott’s sinister guitar harmonies on the Celtic/folk-like "Sweet Magic Pain". Trapeze, Wishbone Ash, and Black Sabbath creep into one of my favorites "One Man’s Curse" musically- Apollo using a rougher voice for the verses but then channeling his best Ian Gillian meets Ronnie James Dio for the thrilling chorus.

Real music by real musicians is the mantra Spiritual Beggars live by- and there’s nothing wrong with it. You can feel smoke smoldering over Amott’s amplifiers, his riffs and emotive solo work channeling the axe man he studied and played by ear in his youth. Per makes Jon Lord come alive once again on "Kingmaker"- the Hammond chord progressions a tidy execution of heaviness plus soul. There isn’t a cut out of the 12 that I haven’t turned away- a testament to the application of dynamic individuality when it comes to the band.

By the time I discovered rock and metal, the 1970’s had passed me by- but as a student willing to take in whatever time (and money) could afford, I went back and researched what acts like Iron Maiden, Accept, Judas Priest, Saxon, and the like took as inspiration. "Earth Blues" has that primitive appeal of five friends coming together every couple of years for pure musical chemistry- and as such will be an album I continually spin for a long, long time.

BOMBS OF HADES – The Serpents Redemption