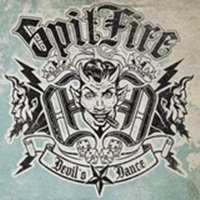 Sometimes the best things in life are simplified. 100% stripped down to hard rock ‘n roll basics, the German trio SpitFire evolve from a successful sold out EP release to their first full length "Devil’s Dance". No- it’s not a type-o: the EP and album have the same name. And 4 of the 13 tracks do make a return appearance for this effort- but overall the spirit of hot rod driven, slightly rockabilly material continues forward for Dick Dropkick (guitar/vocals), Johnny Jailbreak (bass/background vocals), and Nikk Nitro (drums/background vocals).

Crank your amps up to ten and watch the southern highway vocal swagger take you over on future biker bar favorites like "City of the Sinners" and Social Distortion meets Nitrogods send up "Hellfire". I love the slide acoustic guitar antics on "Take the Throne" as well as the four on the floor rhythm elements against the held out organ chords which moves into an up tempo headbanger "No Regrets". I don’t know about the Bon Jovi-like ‘Hey’ exhorting that takes place on closer "King Kerosin", the band would be better off leaving that for their later years.

The original intent of rock ‘n roll was a rebellious form of music guaranteed to not meet favor with older generations- and probably upset your parents in the process. SpitFire have slightly polished their outlook with this album- but not to the point that any of the cool/ ‘in’ crowd will champion. So if you consider yourself a natural outsider, loner, yet love to throw down a few beers to release tension from the end of your work week- "Devil’s Dance" can be your party soundtrack.

THE ARROWS – The Lines Are Open – Re-release