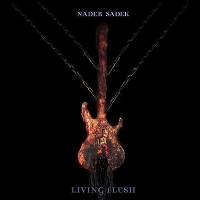 It always seems strange to me when a band with only 1 or 2 albums out releases a live album, but then I come from an era where the double-live gatefold was king, and was always preceded by 5 or 6 studio albums. Whatever the case, I do find the release of ‘Living Flesh’ a mite strange, especially since bar a drum solo the track listing for it and the debut are the same (albeit in a different order). What happened – have they fallen out with Season of Mist? Are they trying to sell this as an alternative to the debut?
In terms of sound, ‘Living Flesh’ succeeds in capturing the raw energy and power of this killer DM supergroup live. The guitars are a little low, and for me the drumming of Flo Mounier is a little over-rated – it adds well to the atmosphere, but feels slightly messy and the kit has a metallic, staticky sound that doesn’t exactly work. And as you can imagine, having said that, I’m not a fan of the drum solo.
I haven’t seen the whole concert package because the promo pack only contained slices of the visual performance, but from what I have seen, it is impressive. The drum kit is set up off stage, in the crowd, but with its back to the punters (apparently to act as the ‘engine’ of the band). Nader Sadek (the man) adds his own brand of performance art, standing at the rear of the stage playing with dark and glistening objects on a table. Rune Erikson and Steve Tucker are as cool as ever, up front.
While I am a fan of this band, I would say that if you have ‘In the Flesh’, you don’t really need this latest edition to the Nader Sadek discography. If you’ve never bought anything by them, then go for the studio release. Simple!

LONG DISTANCE CALLING – The Flood Inside