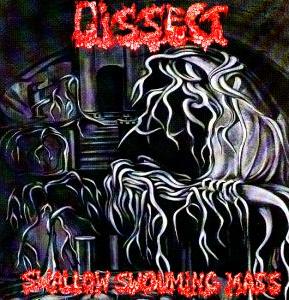 Dave and his brilliant label Xtreem Records is rereleasing the lost gem "Swallow Swouming Mass" by death metal act Dissect from the Netherlands.

Original album release was way back in 1993 and its Dissect only release apart from a couple of demos. This dutch fearsome foursome delivers by todays standard a pretty common form of death metal, but 20 years ago this was for sure labeled as both extrem and brutal. Dissect did not get too much notice in a then way overcrowded market and "Swallow Swouming Mass" ended up being their only effort bofore they folded in 97. I see now that the are reunited as many other old acts are doing these days and it will be exciting to hear what Dissect will sound like 20 years later.

They did operate under influences by both the Stockholm and the Tampa scene at the time with semi melodic songs that does not drag but keep the pace from start to finish. The vocal is very good, mid level growls but not to deep and annoying. The lyrical contect is for you to guess.

The riffing and arrangments are not to spectacular and this keeps the album easy to digest.

Personally I dig this form of (now) old school death without the fancy sound and triggering of today. The album does not deliver anything new to the table but I am sure this will be a pleasant listen for those who dig their death metal old , primitive and dirty.