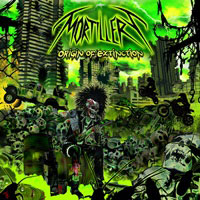 The sophomore outing from Canada’s Mortillery "Origin of Extinction" offers up ten tracks of thrash that will take listeners back to the birth of the genre. In modern times, we are treated to retro thrash that has big beefy digital production and sneaky blasting creeping in here and there. Not so on this release! This is punked-up speed metal with both feet planted firmly in the mid-to-late eighties.

In terms of heaviness then, this is closer to Heathen, Chastain and early Agent Steel than it is to contemporary thrashers such as Blood Tsunami. This might make it a bit too light for some, but it works fine for this reviewer. Vocalist Cara McCutchen is a revelation behind the mike, too. At times she screeches like Stace McLaren, but she can also carry a melody and her high range is superb. I want to hear more from her immediately!

As the album progresses we are treated to mid-paced thrash laced with melodic leads, chant choruses and plenty of stop-start moshing action. Things tend to get a bit samey after a while, though – a bit more variety and some stricter quality control and we would be looking at an act poised to enter the top ranks of modern thrash. As it is though, "Origin of Extinction" just isn’t consistent enough to reach those levels, although it will have you rooting up in the attic for your white runner boots and sleeveless denim jacket…

THE OMEGA EXPERIMENT – The Omega Experiment