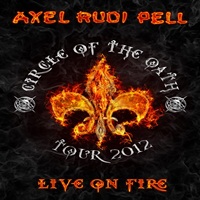 Sometimes the best plans are ones that happen in a spur of the moment. Veteran hard rock guitarist Axel Rudi Pell has been releasing product for over 25 years, but hasn’t released a live album since 2002’s "Knights Live". On the second leg of his "Circle of the Oath" tour in Cologne, Germany, the band decided to let the cameras roll and capture the action. "Live on Fire" is available in four formats : double CD, double DVD, 3 LP (for all you vinyl fanatics), and a limited edition box set with 2 CD’s, 2 DVD’s, a poster and laminated tour pass.

The lineup for Axel’s band has been consistent for 15 years: vocalist Johnny Gioeli, keyboardist Ferdy Doernberg, bassist Volker Krawczak, and drummer Mike Terrana joining the Fender Stratocaster master for a solid 13 track, 110 minute set list featuring a number of medleys and extended solos. Mixing up long-time favorites like "Fool Fool", "Oceans of Time" and a 17:54 medley that includes "The Masquerade Ball/ Casbah/ Dreaming Dead/ Whole Lotta Love/ Dreaming Dead" with a number of selections from their latest album "Circle of the Oath" ("Ghost in the Black", "Before I Die" and the epic title track), there’s a respect and symbiotic relationship in terms of the energy level from musicians to audience and back.

If you are a fan of artists replicating their studio work with exact precision when performing, "Live on Fire" will not meet expectations. Axel prefers to extend instrumental sections, often throwing in outside influences (such as the reggae and The Police influences while the crowd sings along for "Casbah") and giving the individuals in his group a chance to showcase their skills (Mike Terrana incorporating patriotic American elements in his drum solo, while Ferdy flexes his 70’s Jon Lord and Keith Emerson-like licks during his keyboard spotlight).

Overall, if you miss guitar oriented hard rock with magical, mystical themes and a strong affinity for Rainbow, Deep Purple, or anything Dio related from his metal days, Axel Rudi Pell will surely fill up your well with great songs and bluesy, searing guitar breaks. Would love to see him make a trek to North America someday, but in the meantime this is a great testament to the enduring power of hard rock.