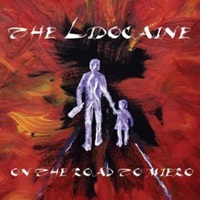 This Finnish quartet The Lidocaine presents an intriguing blend of bluesy, dirt-incrusted hard rock with progressive elements on their second album "On the Road to Miero". The 11 songs on this record fuse the oddball elements of say System of a Down or Faith No More against the straight forward power of acts like King’s X, The Foo Fighters, and slightly doomier/ stoner rock influences. The hysterical vocals from guitarist Anthony Rausku and his partner in crime guitarist Eroz give songs such as "Bring Back the Pain" and "Save Me from Myself" kind of a self-deprecating element that is part humorous and off the beaten path.

I can see many championing this album while others will be turned off by the vocals. Such polarizing strengths and weaknesses leave me with this average feeling- and could affect their ultimate longevity in this business. "Disgust" has this eerie build up and simplified, head down rhythmic groove- a banner cut to let The Lidocaine fly the freak flag at you from a vocal and musical perspective. At other times I feel like they extend riffs for far too long when a streamlined approach could develop a killer final outcome- the 7:43 "Wrong" dragging a touch in the mid-section with too many riffs spoiling the mood.

I’d never say that it’s too late for these Finns to establish their ultimate direction for popularity. For now "On the Road to Miero" slightly peaks out from average shadows, so we’ll have to wait and see if the group can rectify and shore up their weaknesses.

THE OMEGA EXPERIMENT – The Omega Experiment