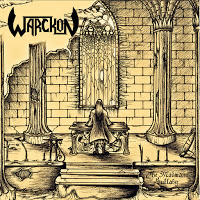 Starting their mission of thrash domination in the summer of 2009, Belgian act Warckon grew a steady following in 2010 before recording this self-financed album in 2011- bumping it up from its intended EP release. French label Emanes Metal knows a good thing when they hear it, so this 10 track effort gets a bigger push now through their promotional and publicity power. "The Madman’s Lullaby" takes a lot of its attack and fierceness from the Bay Area movement- all the way down to the gang-inspired background vocals, the one-two uppity drum beats and schooled lead guitar breaks.

Megadeth, Metallica, Death Angel, and Annihilator are four acts that come to mind most musically, while the vocals are more in a talkative delivery with a speedy nature to keep up with the proceedings. Some of the slower, melodic leads within "After the Noise" for instance conjure up Kirk Hammett during his "Ride The Lightning"/ "Master Of Puppets" exemplary work- while the riffing contains this building nature that should get the fists pumping and the crowds screaming along as Warckon dominates the stage. The follow up "Shattered Illusions" opens with an acoustic sequence, then the bass kicks the song into motion- slightly progressive and spacey in its first strains before the thrash tempo levels you- although the drum fills from Marijn Langhendries appear to be a touch weak for such a technically tight outfit.

Warckon possess obvious instrumental talent and tact- they go for a level of musicality that moves ten steps beyond the newer generation. Jeff Waters would be proud of his influence in much of the galloping and special timing elements that make "Lord of Lunacy" and "Path to the Gallows" standouts for the record. Overall this is an album that may surface under the radar of other thrash bands with bigger label push- but do not discount a band’s worth based on the size of a label’s monetary coffers.

NIGHTMARE – About To Explode