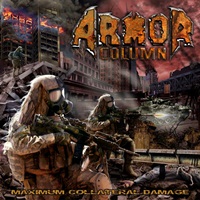 Mexican record label EBM Records as a part of their ‘Thrash Is Back’ series of albums has signed a number of artists from around the globe- including Albany, New York’s Armor Column. Featuring Noah Carpentier (Skinless guitarist) and two Held Under members with vocalist Jeff Andrews and drummer Johnny G the group also includes Ray Russell on guitar and Tom Barber on bass. Since their 2007 formation, the quintet has released the "Armor Up Your Ass" EP in 2009, as well as this 8 song full length debut album.

"Maximum Collateral Damage" has that mid to late 80’s power/thrash sound with middle to upper register vocals in a melodic manner. Jeff’s voice can seriously punch up to bird call Bobby Blitz/ Troy Norr (Coldsteel) highs on appealing material like opener "Warmonger" and "Rattenkrieg" – the latter featuring some twisted blast drumming during the transitions along with sick shred lead breaks. Musically Armor Column waver between riffing and rhythms that are certainly thrash-based, but also appreciate a lot of the US power metal acts like Metal Church, Heretic, and Iced Earth. A lot of war samples from famous movies punctuate the proceedings, and my favorites included the militant charge "Dictator’s Whore" as well as the tribal, neck breaking nature of the stop/ start thrashing title track which features a restrained mid-section a la older Metal Church/ Metallica.

Unlike a lot of newer bands who seem to be liberally cutting and pasting from their favorite Bay Area bands discography and calling it their own with modern production values, Armor Column truly appear to be cut from a different cloth. As such I can see a variety of old school headbangers loving "Maximum Collateral Damage"- solid, tight power riffing, dynamics with speed and tempo control, and a helium lunged singer make Armor Column ready to strike.

SAVIOR FROM ANGER – Age Of Decadence