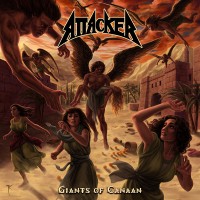 I have so many great memories of the Powermad festival- held in Baltimore, MD during the month of August from 1997 to 2001. A three day gathering of bands and fans into traditional, power, and progressive metal, we were able to witness many first time appearances from overseas artists, domestic label acts and reunion shows. Vocalist Bobby Lucas got the chance to perform with Exhibition- and eventually join the traditional metal outfit Overlorde. Another act that performed there through the years would be fellow New Jersey act Attacker- the band that recorded "Battle at Helms Deep" for Metal Blade and gained a cult following based on their old school sound.

Bobby is now the lead singer for Attacker- and with a fresh deal at hand on Metal On Metal Records, we have the fifth full length album "Giants of Canaan". Classic metal with dual guitar harmonies, pumping bass and drums, and variance high octane vocal action is what you can expect with songs like "The Hammer", "Curse the Light", and "Born Into Battle". Guitarists Pat Marinelli and Mike Benetatos deal out a series of traditional and powerful riffs with a circular and thematic nature, recalling the greatness of early Metal Church and Helstar on "Washed in Blood" and the exotic-tinged "Steel Vengeance". Closer "The Glen of the Ghost" has an epic Iron Maiden nature to the entire arrangement, the acoustic opening with Bobby’s understated delivery quickly merges into this marching movement that I can foresee many festival audiences championing with call and response antics.

Clear production values and an outstanding vocal performance from Bobby (he really shines with power, conviction, and passion for the traditional cause- up in the James Rivera, Bruce Dickinson, and Michael Kiske territory) prove that Attacker isn’t going to rely on the past to keep its legacy alive. Favorites include the harmony fueled title track that features screams of terror and the Mike Sabatini double bass fueled "Born into Battle" that could be a long lost "Thundersteel" cut from Riot’s late 80’s period.

After you’ve purchased the new Enforcer and Holy Grail, be sure to track down "Giants of Canaan"- it doesn’t get much better for American traditional metal than Attacker these days.