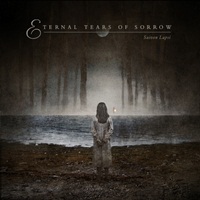 Northern Finnish melodic death metal band Eternal Tears Of Sorrow have been an integral part of the Scandinavian scene since 1994- releasing 6 albums in a 15 year span, including a self-imposed break during 2003-2005. Four years beyond their last studio offering "Children of the Dark Waters", the sextet appears rejuvenated and resolute in their sound for the 11 tracks on "Saivon Lapsi". The heavier parts contain the right forcefulness, the melodic sections grabbing you with a morose tenderness normally reserved for the classic Paradise Lost or Sentenced material we’ve all come to know and appreciate.

Bassist Altti Vetelainen handles the harsh vocals while Jarmo Kylmanen tackles the clean parts, and as such the two contrasts propel cuts like "Dance of December" and "The Day" to the upper tier of high class acts, as it gives the listener the beauty and darkness aspects that make this sub-genre very appealing. Keyboardist Janne Tolsa isn’t background fodder for the guitar exploits of compatriots Mika Lammassaari and Jarmo Puolakanaho- his tender touch and soothing symphonic serenades aiding the stirring cultural themes within "Beneath the Frozen Leaves" and more commercial sounding video track "Swan Saivo". The 7:30 closer "Angelheart Ravenheart (Act III: Saivon Lapsi)" is the standout to me- great, outer spectrum background vocals from guest female singer Miriam Renvag of Ram-Zet, a doomy march beginning that transitions into theatrical melodic death bliss- many of the guitar rhythms and drum tempos touching on the long-missed brilliance of Sweden’s Edge of Sanity and the final 2 minutes featuring this swirling atmosphere of keys, guitars, bass, drums, and vocals that will send chills over every fiber of your being.

Eternal Tears Of Sorrow is a band that transitions with the expanding influences of its members. These days the symphonic/ gothic elements may be a touch more prevalent, without forsaking the extreme vocals and heavier guitar edge. As such, "Saivon Lapsi" is another outstanding record in their fine discography, and will not disappoint long time followers of the group.