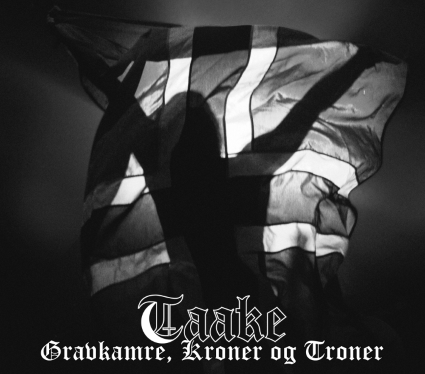 Taake celebrates 20 years as a band by releasing a collection of 20 songs distributed on a double CD. There’s not much new material, but many good and old tracks that is not easy to get hold of. Taake has never released their records in large quantities, so there’s an opportunity to get the songs where you otherwise will struggle to obtain the originals. The album is basically a collection of all the EP’s and 7 " released through Taake’s career, as well as all the bonus tracks from the vinyl versions of the full lenght albums.

Cd 1 opens with two new tracks created for the collection. "Et pust av oyene" and "Hov var stein" picks up where Norges Vaapen ended, and the songs that gets better and better every time I hear them. It gives a good indication of ​​what the next Taake album will feature, and if it keeps this level, it will not disappoint those who wait. This is TNBM as it should be. The album continues with the third version of Nordbundet since the Kveld EP was released. This time with Niklas Kvarforth and Nocturno Culto on vocals. I’m so used to the original so it was very strange to hear it with completely new vocaltracks, but it’s worth checking out, and you can probably expect something live if you have the right people in the concert venue at the right time.
After the three first tracks you get the most famous Taake songs, namely Motpol, Hordaland Doedskvad 1, Over Bjoergvin Graater Himmerik 4 and Nattestid ser Porten vid 1. The latter taken from the Kveld EP is a live recording from the studio. From there, the record follow it up with Emperor’s I am The Black Wizards, GG Allin’s Die when you die and Burzum’s A lost forgotten sad Spirit. Great cover songs that are played with great respect for the originals.
Cd 2 is obtained from all minor releases, and this is where there is much to gain for both new and old Taake fans who have not had the opportunity to get hold of the releases that have been in very small quantities and mainly on vinyl. It starts with the Svartekunst 7 " before you then get the Nekro EP with Voldtekt, Lamb of VON and Hennes kalde Skamlepper – taken from Lagnonector which was a split with Vidsyn. Here you will also find Death Trap from the Dra til Helvete split with Gigantomachy, Der Todesking from the Nordens Doedsengel split with Amok and finally a pre-mix of Nattestid ser Porten vid 1 from 1997.
If you are a Taake fan or if you just like True Norwegian Black Metal then this is a compilation you can not afford to miss out on. This is raw and brutal the way Taake has always been, and this is an album that allows you to play old hits without dusting off the turntable if you’re one of the lucky ones who has the originals . However, there are plenty who have discovered Taake the recent years, and I guess they will have the greatest advantage of this album. Here you get the songs that you otherwise only find in poor quality on the web presented the way Hoest himself intended, and it should be said that he is incredibly conscious that the releases he writes his name on keep the quality he have imagined, and he does not fail with this great double cd.