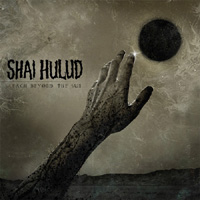 SHAI HULUD – Reach Beyond the Sun

Far and away one of the best metallic hardcore bands in history, Shai Hulud have never once disappointed with their output.  Unfortunately, it’s never been a very easy road for the band, with a constant changing of band members always seeming to pop up.  However, founding member/guitarist Matt Fox and long time member/bassist Matt Fletcher have persevered and kept them going strong.  And thank goodness for that.

The band also has always had long time periods between albums – the shortest being five years.  And here we are, five years after the brilliant "Misanthropy Pure" disc, with their latest "Reach Beyond the Sun".  Hey, stick with what works, right?

With the departure of vocalist Mike Moynihan in 2012, the band employed former vocalist and guitarist of the ever-popular New Found Glory Chad Gilbert – who also produced this album – to record the lead vocals for "Reach Beyond the Sun".  Mr. Gilbert had done an amazing job in Shai Hulud during his tenure, so no doubt whatsoever he would do a bang up job here.  And that is definitely the case.

Right off the bat, "The Mean Spirits, Breathing" tears into the listener with blazing pace, progressive guitar work, and timely harmonized vocals.  The instrumentation is so top notch from this band, as is the energy.  Both of which never let up for a millisecond.  Anybody who has ever seen them live can attest that this is one of the most energetic bands on the planet, and said energy comes through on every song.  The title track is a standout that’s defined heavily by searing leads that carry the song, making it one of the more melodic tracks on the album.  "A Human Failing" is a bit slower in pace, but is loaded with emotion and tons of punch.  Gilbert’s vocals are a high point on the song, as one can really "feel" them – this being a very important quality to the sort of music Shai Hulud make.  "Medicine to the Dead" contains some of the most varied song structures of any on offer, while "Monumental Graves" harkens back to very classic Shai Hulud aggressiveness and beyond awesome shouted choruses.

Coming in at just over 34 minutes in length, "Reach Beyond the Sun" is a compact and concise chunk of absolute quality.  It leaves the listener satisfied and ready for many repeat listens.  This is catchy, poignant, and downright stellar stuff.  No real surprise, being as this is one of the most consistent metallic hardcore bands in the history of the style.  And don’t let the word "hardcore" dissuade, as many so-called metal purists ignorantly do.  Anybody who appreciates well-composed aggressive music should find something to like.  The Hulud simply rules.