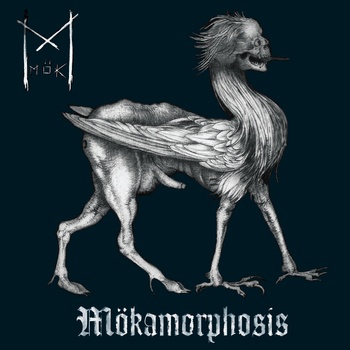 Mök is finally out with their debut album and what a slam dunk to your genitals it is! Unrelenting dirty and cold black/thrash with veins to the primitive and click-less times. Old school may be a term to describe "Mökamorphosis" but it´s actually much more. Their influences and mindset may be from the late 80´s/early 90´s but their rhythm and groove also passes for a more modern take on the mix of genres they operate in. There´s much more to their riffing and even though the album sounds chaotic and primitive at first listen it really grows on you after a couple of spins. Their song structures and arrangements are pretty simple but they take it back in atmosphere, that cold grim feeling just wont let go on second track Deadman for example.

The vocal is also worth mentioning, it fits the music just perfectly and thumbs up to person who did the mastering for making it just enough present in the overall wall of unholy noise. It´s necro , pure evil and with a touch of madness and who does not appreciate that(?).

These five Norwegians take it all out and on "Mökamorphosis" and I´am looking forward to the always so hard follow-up.

SHAI HULUD – Reach Beyond the Sun