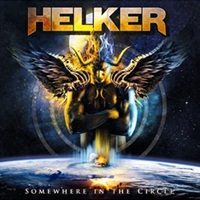 I’m so glad that through the good graces of AFM Records and Mat Sinner of Level 10 Music management (also known for his work with Sinner and Primal Fear), this power metal act from Buenos Aires, Argentina gains a bigger platform to showcase their wares on this fourth studio album. Formed in 1998, the quintet has released three previous Spanish language records, building up their fan base as well as opening for some of the biggest acts in their genre in Buenos Aires like Rhapsody, Stratovarius, Gamma Ray, Hammerfall and the aforementioned Primal Fear.

The first aspect that stuck out to me with these 10 tracks ("Dreams" is an 11th bonus cut on the digi-pack edition along with 2 videos) is the remarkable range and power emanating from vocalist Diego Valdez’s larynx. Aspects of Rob Halford and Ronnie James Dio immediately come to the fore on "Modern Roman Circus" and his trio effort with Ralf Scheepers and Tim ‘Ripper’ Owens "Begging For Forgiveness"- plus a convincing demeanor with proper English pronunciation given the fact that he’s singing in his non-native tongue. Musically guitarists Mariano Rios and Leo Arists prefer classic riffing and melodic breaks over mere shred fest impressiveness: Brainstorm, Dio, and Primal Fear influences appear prevalent on standouts like "At the End of the Journey" and the slow building, Rainbow-esque "Flying". Recording with Mat Sinner and mixing/mastering with Achim Koehler insures a superior production for Helker, the best snare snaps, bass tones, and fullness necessary for ultimate headbanging.

Maybe Helker can do for Argentina today what Viper and Angra were able to do for Brazil years ago- open the international metal community to the strength of their creativity and potent talent. Straight ahead power never goes out of fashion, so "Somewhere in the Circle" is mandatory if you miss the days of black leather, reach for the sky vocal prowess, and flying V’s as the six string weapons of destruction.