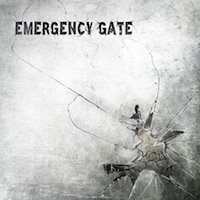 The fifth album from German melodic death metal band Emergency Gate could be a gateway record for some- or a getaway record for others. Reason being? There are certain elements that metal fans do not wish to see merge together: corpse paint with Aqua Net hair, Auto-tuning any element of vocals, and oh yeah: dipping into the metal-core bag of tricks. You know them well: the countdown to the breakdown ("Moshpit"), the half-time drum groove punctuated with trance-like keyboards ("Force United"), or the repetitive hoarse screams that signal another pit approved riff ("rEvolution").

It’s one thing to expand your style in the hopes of massive acceptance- but I guess when you want to incorporate elements of the American metal-core scene into a European melodic death metal style, there better be conviction (and convincing) or the ardent followers will abandon your efforts like the plague. It’s as if Emergency Gate took the more palatable aspects of the melodic death scene from In Flames or Soilwork and then discovered Trivium- rendering the majority of this album as direction-less. "Back from the Grave" with its Sentenced-like riffs and vocal melodies is the best of the bunch- but one out of twelve equates to delete from my brain.

Maybe they’ll attract newcomers to the scene. I doubt that most will be pleased with this shift in direction- and Emergency Gate better be looking for a new creative nuance or twist to recover on their future recordings.