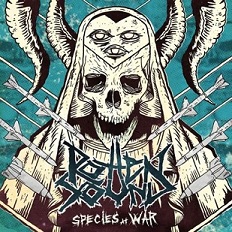 Have you got 8 or 9 minutes you don’t want?
Have you received a brick in the face lately?
Have you been chained inside a metal dustbin and kicked down a flight of stairs recently?

If your answer to any of the above is ‘no’, then you could do worse than check out ‘Species at War’. On offer we have six blistering tracks, each of which manages to engage the senses through a medley of ultra-heavy breakdowns, face-melting blasting and grinding death.

EPs don’t normally appeal to me, but in the case of Rotten Sound, I sometimes find I get lost in their full-length albums because by the time I get halfway through, my ears and brain have been pummelled to the extent that I can hardly tell one song from the next. So, in this context the short sharp shock provided by ‘Species at War’ works a treat.

Fans of the band will already know that Rotten Sound aren’t ones for unveiling a massive evolution between songs, so won’t be expecting anything really new or groundbreaking in the mix, but when it works this well, what’s to change?